How to safely and efficiently remove ball studs on your 785, 789 & 793 Caterpillar truck fleet

Geographe have been supplying ball stud kits to suit Caterpillar 785, 789 and 793 trucks for many years and have now developed a tool to aid in their removal.

HOW DOES IT WORK?
Geographe’s patented Ball Stud Removal Tool (BSRT) is a hydraulic pressing system designed to safely and efficiently remove ball studs from 785,  789 & 793 series haul trucks using pressure applied to the bottom or threaded end of the ball stud.

HOW DOES IT PERFORM?
In field testing, the BSRT has been removing studs at a significantly faster rate than the current industry norms.  Success rates will vary however our customers have reported an average 90% success rate on removing studs on first attempt.

With a correctly positioned truck, and a crew of 6 working on the truck, 6 studs were successfully released in under 15 minutes during a test at a Western Australian Mine site in 2020.

Actual times will vary based on individual trucks condition and how they are set up for maintenance.

IS IT EASY TO USE?
One of the key qualities of Geographe’s BSRT is its ease and safety of use.  It has been design to be a single person operation tool and a full user manual is provided to help get the most from the tool.

Its general ease of use is summarised in 5 simple steps below: 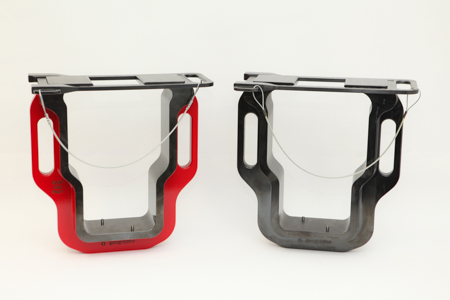 Real world removal scenarios will be different and considerations to be aware of include: 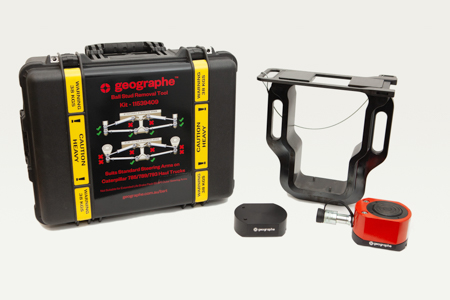 “Developed with our contractor Geographe Engineering, the tool has reduced the time to remove ball studs from 12 hours per truck to just 1 hour. The risk of damaging jacks throughout the process has also been removed.

By limiting the movement of the truck and the chance of hardened mud hitting the maintainer during the stud removal process, safety has been significantly improved.

This initiative represents a significant cost and time reduction while also improving safety for our maintainers.”

“Feedback from the workshop team is the 9 out of 10 times the Geographe tool works fine. If they get a stubborn one they remove the tooling and apply heat to the steering arm, then refit the tooling and they usually pop.”

“Mate just some feedback on the uprated ball stud tool, we are very pleased with the upgraded tool performance.

We are finding that it is working very well and haven’t found any yet that it hasn’t worked on, only one we had to apply a small amount of heat to the taper to make it pop.”

“Although we only have a relatively small 789 Fleet and no 793’s, I have seen this tooling at another company and know the value that it gives.”

“Using the Geographe Ball Stud Removal Tool, the workgroup was able to separate 6 ball studs in under 15 minutes, this all done without heat or excessive stress on steering components”

“After using the Ball Stud Removal Tool, I have seen first hand the value it provides.”

LET US KNOW HOW WE CAN HELP

4 Simple Ways to Enhance Your Purchasing Experience with Geographe Online