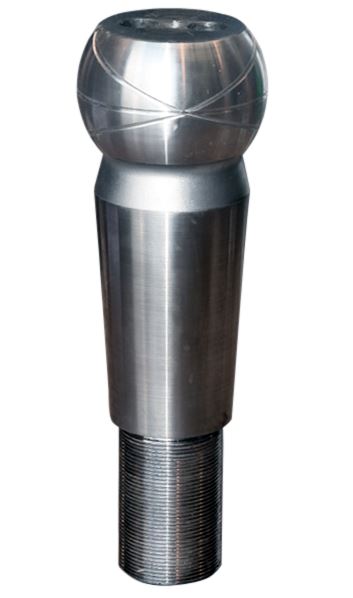 Geographe have created a ball stud, designed to give a superior life span when used in a CAT 789 or 793 Haul Truck. This ball stud is equivalent to 8X-9620.

1 – What are the strength and fatigue properties of a Geographe 789/793 Ball Stud compared to that of an equivalent Caterpillar Ball Stud?

Geographe Ball Studs have over twice the impact resistance of an Caterpillar 8X-9620 Ball Stud tested, so are tough and wear extremely well.

2 – Is there a material difference when manufacturing the Geographe ball stud, in comparison to the OEM?

Yes, our material choice offers optimum toughness and impact resistance when coupled with our heat treatment specification in order to help create a superior stud.

3 – How does the Geographe ball stud design differ from the original OEM design in order to reduce the risk of cracking?

Geographe use high tensile alloy steel that is heat treated to a very tough, impact resistant condition. The neck radius has been control shot peened to provide a layer of compressive residual stress.

4 – What life span should we expect from a Geographe Ball Stud when used in CAT 789 and 793 trucks?

Geographe conducted a trial with a valued international client conducting periodic inspections up to 18,000 hours.  Upon final inspection the trial, had been considered a success and the components were utilised in accordance with scheduled maintenance practices.  The stud lifespan may vary depending on the conditions in which mining is taking place.

5 – What is the recommended Geographe inspection & maintenance strategy?

Geographe recommends inspecting the ball studs as per the Caterpillar OEM specifications.

6 – Do Geographe offer oversized versions of these studs?

Yes – we offer two oversized  ball stud versions.  The nominal diameter (dimension “z” in the figure below) of the standard, first and second oversized versions are:

Oversized Ball Studs are usually made to order.  Please contact us regarding manufacturing lead times.

8 – Do Geographe offer a tool which can assist us when it’s time to remove these studs?

Geographe are proud to have sold thousands of our ball studs and ball stud kits to suit Caterpillar Haul Trucks to a wide variety of customers worldwide for over 20 years.

The taper to socket radii is machined to N6 and shot peened to apply a state of compression at the surface.

We have also added figure 8 grease grooving to the socket area increasing the lubrication spread by approximately 200%.

As of 2020, we have yet to have a recorded failure…. Why not see why a Geographe Ball Stud is a better ball stud.

Have a question we haven’t answered above?

How to safely and efficiently remove ball studs on your 785, 789 & 793 Caterpillar truck fleet